Shouldn't the map be put to vote to ALL the nations and not just the senate? The old map (Normal India map) has my vote. An Ancient India map gives a wrong impression of our region and another negative for people to capitalise on.

This was the last map as updated in the old IndiaNS forum. 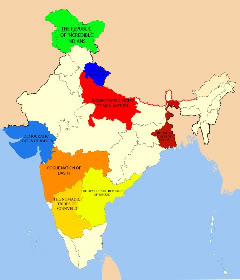 I could continue updating this or start out a fresh map on a customized template with all the nations that the members want including their first level administrative divisions , aka, provinces or states.

For eg: you can have an india only map, a peninsular map, a south asia map, an asia map or a world map.

This is a world map as used for role playing in the Cybernations Forum. I am the Kingdom of Cochin there.

It is my desire that we start role playing on a similar model with similar activity.CN RP Forum

For anyone unsure of what role play is I suggest checking that forum and its various posts out. In that forum, I am the Kingdom of Cochin, occupying territories in China, Kazakhstan, Kyrgyztan and having colonies in Balochistan, Ratnagiri, Somalia, Antarctica and Kamchatka.

Hey trip I am also in Cyber nation.

Really? which is your nation and what alliance are you in?

Pm I think the map issue need to be resolve soon.Its taking too much time.

I think the Indian map should be continued. If we run out of states, neighbouring regions can be absorbed.

Ok then but I believe there should be role play in selecting the states we choose.

Everyone should be allocated their first state on a first come, first serve basis. After this, the nations that are willing to roleplay frequently can do so as they please. I for one, will be able to take part in regional politics but wont be able to roleplay for the map etc. till early jan.

Ok then lets place our demand here and trip will update it.

I would like to have my territory on the old map of India.. (all of Pakistan, Indian Punjab state, Haryana, and Himachal Pradesh)

Pakistan isn't included in this map yet bro....you can RP it when the time comes!

I would like to continue with my old territory of UP and preferably an addition of bihar as well (no jharkhand is fine by me).

Also, trip will be looking at nation size while allocating territories.

All of uttrakhand and a some of Bihar

Hey I want West Bengal and Kerela.Color it in red.

Give me Tripura.Mine Red too deep red.

manumental wrote:Pakistan isn't included in this map yet bro....you can RP it when the time comes!

that's too bad.. i was hoping to have access to the sea.. gaining control of the Indus river valley was my nation's biggest aim in the old Indian RP..

and i can't dominate the Arabian Sea without a navy

manumental wrote:Pakistan isn't included in this map yet bro....you can RP it when the time comes!

that's too bad.. i was hoping to have access to the sea.. gaining control of the Indus river valley was my nation's biggest aim in the old Indian RP..

and i can't dominate the Arabian Sea without a navy

Surs strongly protests on words of Punjabi.This type of words can create regional tension and if punjabi is a responsible nation will further keep away from such comments otherwise Surs will be forced to complain at the council of SENATE.

Punjabi be responsible.Thats the only word.A bourgeoisie society of yours should never understand communism and so further comment on communist in bad terms like urs will be noted as a conspiracy and Senate will be forced to take action.

Very well.. your protests are noted and the Panjabi Nations will refrain from issuing such pre-emptive statements in the future

However any comment on communism can be done in role play but nowhere else but too in boundaries of Morality.I hope u understand.

I understand. I was simply posturing for a potential role-play scenario.

I don't really see a map except an old one on page 2. I would like Maharashtra and if it doesn't mind Sonnveld, the city of Mangalore in coastal Karnataka. Thanks

Sonnveld is willing to cede to Clandon, the state of Goa, in return for keeping Mangalore.

Is this acceptable to you?

Truth is, we were having a hard time figuring out what to do with all those churches.

I'll take all the churches you have

Here is a temporary map (that I though would be useful to show changes) https://2img.net/h/oi47.tinypic.com/2zdmwlc.jpg

I saw that both Manumental and Abhuland wanted Bihar so I gave Abhuland a small portion of Bihar near the Nepali border so that when we do include Nepal in the map, Abhuland can RP and connect his nation.

I added my capital city, Bombay as well to the map. Tell me what's yours.

And I also thought Delhi should be declared a Regional Zone- a neutral city for Regional Administration. Tell me what you think about it

I'm glad you took the initiative to incorporate all the claims, Clandon.

However, you have missed out Indois (Gujarat), Incredible Indians (J&K), and SSmszs. SSmszs is not currently active here, so his claim can be reversed as its too old.

You have also totally missed the fact that the territories of Maharashtra have been claimed by our good recruitment minister, Dashy. I wanted Maharashtra too but was late by an hour or so. Sorry man, you'll have to pass it up in favour of another territory!

Delhi being a neutral, regional HQ is a great idea. It has my vote. I would also like a dialogue with Abhu regarding the Bihar bit - The bit you have allocated to him is the one that I am most interested in.